Watch Repair and What You Should Watch Out For When It Comes to Fake Gold Watches | Parker, CO

Photo By ASphotowed at istock

There Are a Lot of Fake Gold Watches Out There

Watches can be very valuable. As a result, Parker, CO residents need to be careful of fake watches made out of fake gold, which can be surprisingly convincing under certain circumstances. Fortunately, there are a number of methods that interested individuals can use to distinguish between real gold and fake gold in watches without having to consult a watch repair specialist or some other watch specialist.

How Can You Tell When Gold Is Fake without Causing Damage?

Here are some examples for buyers:

Gold won’t react to a magnet. However, some of the most common metals used in fake gold will react to a magnet. As a result, one of the easiest ways that interested individuals can check for fake gold without consulting either a watch repair specialist or some other watch specialist is to use a magnet. Please note that this method is far from being perfect because it is perfectly possible for people to make fake gold using metals that won’t react to a magnet. Furthermore, it should be mentioned that some watches can have some components that are made out of real gold and some components that are not made out of real gold, meaning that interested individuals need to pay close attention to what they are seeing.

For Parker, CO residents who are curious about a very water-resistant watch, there is an extra option in the form of the float test. Basically, gold is very heavy. Due to this, it should sink in water whereas some of the most common metals used in fake gold will cause it to float instead. Be warned that this is not something that interested individuals should be using on anything other than very water-resistant watches unless they want to make an hurried visit to a watch repair specialist. This is because exposure to excessive amounts of water can be very damaging to a wide range of materials, meaning that it isn’t something that people should be subjecting their watches to. Generally speaking, if a watch is just “water-resistant,” that means that it can handle being splashed with water but not much more than that. Instead, interested individuals should avoid the float test unless they are curious about a watch with “water-resistant 50m” at the very least because that is when a watch can hold up to swimming and white-water rafting but not diving and snorkelling.

Look For Discoloration On the Watch

In some cases, scammers will pretend that plated gold is real gold, thus making it that much more difficult for interested individuals to guess what is going on without consulting either a watch repair specialist or some other watch specialist. However, gold is soft by metallic standards. As a result, it might be worth checking out places where the material has been rubbing up against the wearer’s skin as well as the wearer’s clothing because said movement might have removed the surface to reveal the truth of the material found underneath. Generally speaking, discolorations are a sure sign that something is wrong, meaning that interested individuals should check in with a watch repair specialist sooner rather than later.

Look For Discoloration On the Skin

Speaking of which, it can be worthwhile to check for discoloration on the skin as well because the skin produces oil as well as sweat that can be very revealing. On its own, gold should show no reaction to these substances. However, there are other metals that can’t say the same. For example, silver can leave behind silver marks. Likewise, copper can leave behind green marks. Having said this, interested individuals should know that there are some examples of gold that can leave behind such telltale traces. In short, gold isn’t used much on its own because it is too soft for practical use. Instead, it is mixed with other metals to create gold alloys, which can look pleasing to the eyes without possessing a host of beneficial properties that can’t be found in pure gold. Unfortunately, this means that some gold alloys with very high percentages of other metals can leave behind such marks, meaning that interested individuals might want to get their watch checked out by either a watch repair specialist or some other watch specialist.

Check the Weight of the Gold

As mentioned earlier, gold is very heavy. Due to this, it is popular for interested individuals to check whether gold is real or not by checking its weight. Unfortunately, this is much easier with other gold jewellery than with gold watches because the latter possesses more components that complicate the necessary calculations. For those who are less than curious about said process, it might be best for them to consult with either a watch repair specialist or some other watch specialist to make use of their expertise and experience.

These are some very simple tests. Unsurprisingly, this means that there are more sophisticated counterparts that can be found out there, meaning that interested individuals shouldn’t hesitate to consult either watch repair specialists or other watch specialists for further information. We would love to help you at Matheu’s Fine Watches.

At the end of the day, the sheer number of scammers out there means that interested individuals should be prepared to call on watch repair specialists and other watch specialists as needed. After all, while said process can prove to be laborious and time-consuming, it is still better to undergo them than to run the risk of being fooled by an unscrupulous seller of fake watches. Otherwise, interested individuals might not notice anything wrong until their watch repair specialist passes on the unfortunate news to them. At this point, it could be too late for them to seek their rightful restitution.

Watch Repair and What You Should Watch Out For When It Comes to Fake Gold Watches | Parker, CO2020-03-212020-03-24https://www.matheusfinewatches.com/wp-content/uploads/2017/05/header-logo420x179.pngMatheus Fine Watches & Jewelryhttps://matheusfinewatches.com/wp-content/uploads/2020/03/watch-repair-and-what-you-should-watch-out-for-when-it-comes-to-fake-gold-watches-_-parker-co-.jpg200px200px
HIGHLANDS RANCH STORE
BRECKENRIDGE STORE
WORLD OF MATHEUS 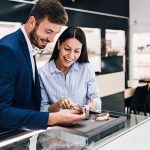