Photo by Angyalosi Beata at Shutterstock

If you’re thinking of customizing an engagement ring, there are many design elements to consider. Before you order a custom ring from your Denver, CO, jeweler, you might want to spend some time getting to know some of the most dazzling engagement rings from history. Why not? The ring you create may become a treasured heirloom one day too. After learning about some of history’s most celebrated and eclectic engagement rings, you’ll be ready to advise your jeweler about how to create your engagement rings.

Empress of France and first wife of Napoleon I, Josephine de Beauharnais may have had a tumultuous marriage to the French dictator-turned-emperor, but then, who wouldn’t? Their love affair involved marriage, annulment, and remarriage. In spite of their ups and downs, including his separation from the beautiful Josephine while he was imprisoned on Elba, his very last earthly word before he took his final breath was “Josephine.”

While he may not have been ideal husband material, he did have excellent taste in jewelry. Napoleon proposed to Josephine and offered her an elegant gold ring containing side-by-side teardrop gems–one diamond and one blue sapphire. The ring is said to symbolize the joining of their hearts.

Agatha Christie is hailed as one of the best-selling authors of all time. The author’s love of jewelry, however, is less well known. After the author died, many of her belongings were put up for auction. A British woman bid on and won a locked trunk that had originally been owned by Christie’s mother, but she chose not to open it for years, allowing its contents to remain a mystery. However, once she did open it, she retrieved jewels once owned by the mystery queen, including a band containing three diamonds that had belonged to the author’s mother.

If you’re searching for engagement rings in Denver, CO, you’ll be hard-pressed to find one like Queen Victoria’s bejeweled serpent-inspired beauty. Victoria’s ring features the head of a snake that’s encrusted with an emerald, rubies (for its eyes), and diamonds (that form the mouth). Unusual–yes! But the story of the ring has its roots in the Roman era when snakes were a symbol of everlasting love. When designing your one-of-a-kind engagement ring, be sure to view this stunner. It’s definitely an example of an out-of-the-box style that could inspire your creation.

Late First Lady Jaqueline Kennedy Onassis was a style icon. While her signature pillbox hats frequently made headlines, her engagement ring from John F. Kennedy has been revered as one of the most famous engagement rings of the last 100 years. The ring features a 2.88-carat emerald cut diamond set beside a 2.84-carat emerald. Rows of baguette diamonds set off the two larger gems to perfection. Dripping with Art Deco style, the ring was valued at roughly a million dollars in 1953. While it’s not everyone that can afford to design such a splendid jewel, it has certainly inspired countless ring designers.

Joe DiMaggio gave Marilyn Monroe a ring that would become one of the most famous celebrity wedding rings–band encrusted with 36 baguette-cut diamonds. The platinum ring is renowned for its sophistication and simplicity. DiMaggio reported that the ring symbolized their eternal love. Although the pair’s marriage didn’t last, they were known to remain in love and there are rumors that they intended to remarry before the actress’s untimely death.

Amantine Lucile Aurore Dupin, better known by her pen name George Sand, once received a remarkable jewel from her grandmother who had received it as a gift from Maria Josepha of Saxony, the Dauphine of France. The stunning ring has long captivated the literary world and jewelry enthusiasts alike with its center stone, a nearly colorless blue sapphire. Because the stone is set on gold foil, it actually appears to be a dark pinkish-red. It’s surrounded by diamonds and remains one of history’s best-known rings. Although diamond engagement rings continue to be popular with couples who are ring shopping some are looking for diamond alternative options. This is definitely a ring to draw inspiration from. Moreover, Sand is famous for her French novels of love and passion.

She Kept Her Head–and Her Jewels

Of Henry VIII’s wives, Catherine Parr was one of the few to survive his wrath. As the most married of all English queens, Henry was not her first husband or her last. As Henry’s 6th and final wife, Catherine outlived him and was allowed to retain her jewels and wardrobe upon Henry’s death. One of the most famous rings in her collection was her stunning gold ring that featured a large stone of deep green malachite surrounded by diamonds. The extraordinary ring is often reproduced in similar styles.

Featuring a 27-carat aquamarine, Lucille Ball’s engagement ring is another one of the most famous celebrity jewels. The ring is flanked by 12 brilliant round diamonds set atop a yellow gold band. Apparently, the ring was a replacement for a department store brass ring the comedic actress wore when the couple eloped. Desi was able to upgrade the original ring to this glorious jewel that features Lucy’s favorite color–aquamarine.

These are just a few historic rings to get you thinking about other engagement rings and styles so you can design one that expresses your own style. At Matheu’s Fine Watches & Jewelry, we customize engagement rings and other jewels using the most advanced techniques and jewelry craftsmanship. You can choose your diamond or other gems and we’ll help you create a dazzling setting. Be sure to browse our available engagement rings, all the styles when jewelry shopping in Denver, CO. 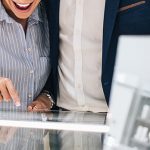 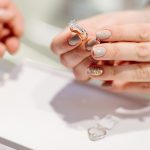